“I am the Greatest!”

The famous words yelled proudly and assuredly by the greatest boxer that has ever stepped foot in the ring.

He claimed it, and sure as hell lived up to it.

No one argues about who the greatest boxer is… there is no Lebron/Kobe/Jordan conversation happening in the world of boxing. (Jordan by a mile fyi)

Tyson was  on bad dude but when it came to the mentality of the sport, and the mechanics and psychology of boxing, no one did it better than Muhammad Ali.

No one, in almost any sport, not just boxing, created a public persona quite like Ali did.  Every change he got he was in the public eye and in front of cameras talking trash and spinning rhymes.  He knew he had the gift of gab and figured out how to market himself well and us it to his fullest advantage.

In today’s day and age Ali would have been king of social media, he accomplished the equivalent of this back in the 70’s.  It really is quite a miraculous feat when you think about it.

We lost another great part of American History with Ali passing away.

He created so many famous moments in history as well as in the sport of boxing.  Muhammad Ali will be sorely missed. 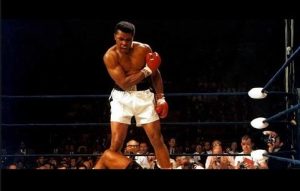